Introduction: In this post, I'm going to describe some efficient approaches to estimating the mean of a random variable that takes on only finitely many values. Despite the ubiquity of Monte Carlo estimation, it is really inefficient for finite domains. I'll describe some lesser-known algorithms based on sampling without replacement that can be adapted to estimating means.

Setup: Suppose we want to estimate an expectation of a derministic function \(f\) over a (large) finite universe of \(n\) elements where each element \(i\) has probability \(p_i\):

However, \(f\) is too expensive to evaluate \(n\) times. So let's say that we have \(m \le n\) evaluations to form our estimate. (Obviously, if we're happy evaluating \(f\) a total of \(n\) times, then we should just compute \(\mu\) exactly with the definition above.)

Monte Carlo: The most well-known approach to this type of problem is Monte Carlo (MC) estimation: sample \(x^{(1)}, \ldots, x^{(m)} \overset{\tiny\text{i.i.d.}}{\sim} p\), return \(\widehat{\mu}_{\text{MC}} = \frac{1}{m} \sum_{i = 1}^m f(x^{(i)})\). Remarks: (1) Monte Carlo can be very inefficient because it resamples high-probability items over and over again. (2) We can improve efficiency—measured in \(f\) evaluations—somewhat by caching past evaluations of \(f\). However, this introduces a serious runtime inefficiency and requires modifying the method to account for the fact that \(m\) is not fixed ahead of time. (3) Even in our simple setting, MC never reaches zero error; it only converges in an \(\epsilon\)-\(\delta\) sense.

\(\textrm{PrioritySample}\) can be applied to obtain a sparse and unbiased representation of any vector in \(\mathbb{R}^n\). We make use of such a representation for our original problem of budgeted mean estimation (\(\mu\)) as follows:

You can get the Jupyter notebook for replicating this experiment here. So download the notebook and play with it!

The improvement of priority sampling (PS) over Monte Carlo (MC) is pretty nice. I've also included PPSWOR, which seems pretty indistinguishable from PS so I won't really bother to discuss it. Check out the results! 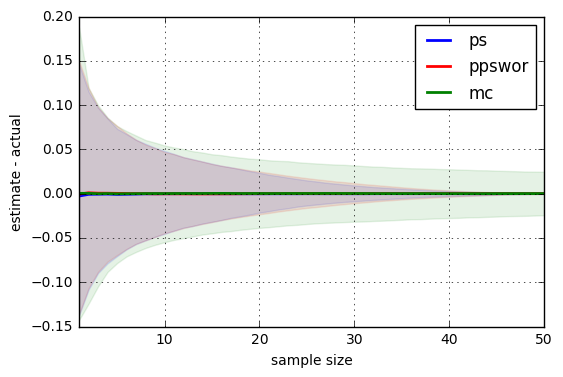 The shaded region indicates the 10% and 90% percentiles over 20,000 replications, which gives a sense of the variability of each estimator. The x-axis is the sampling budget, \(m \le n\).

The plot shows a small example with \(n=50\). We see that PS's variability actually goes to zero, unlike Monte Carlo, which is still pretty inaccurate even at \(m=n\). (Note that MC's x-axis measures raw evaluations, not distinct ones.)